What kind of particles are transmitted by the magnetic force between the two magnets?

Let us first understand what the magnetic force between the two magnets belongs to, so that we can understand how this force is transmitted!

Gravity is the long-range force, which is the smallest of the basic forces, but in celestial interactions, gravity is the most common force! Gravity is thought to be used to transmit gravity, but it is still being guessed so far, or we can think of it as wrong for the time being. After all, it is not recognized. In quantum mechanics, the definition of gravity is: a spin 2, boson with zero mass!

The weak interaction is transmitted by fermions or bosons, which is the second weakest of the four forces and the shortest distance. It only acts on fermions such as electrons, quark layers, neutrinos, etc., and restricts radioactivity!

Just when we thought Apple had done it all, they introduced a new version of their tablet that caught our attention—the 2018 version of the iPad Pro, which contains 102 Small magnets. That’s right, 102 MAGNETS. These magnets are used to hold the Apple Pencil stylus to the side of the tablet and to attach the Smart Keyboard Folio. You can’t tell the magnets are there, however. While they’re distributed mainly along the edges of the tablet, you can only see them by using a magnetic field viewing film!U-poleamg a wide variety of magnets can be provided.

For neodymium magnets, plating is an very important process to protect the magnet against its working environment

For POT magnets, if no special request, we use neodymium magnets with a Ni-Cu-Ni coating for our pot magnets. In addition to traditional plating like neodymium magnets, we also can supply colorful paint finish like common white paint:

However, we always hope our life is full of colors and different

So we tried to use Electrophoresis Coating for POT magnets for adding different bright colors and  get good feedback from our customers.

However, if your magnet requires a particular characteristic or operates in a particularly high temperature or corrosive environment, Electrophoresis Coating is not the best choice, please contact our sales engineer for more information 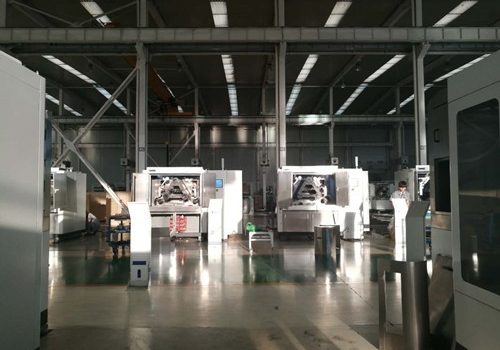 Multi-wire saw has been used for the machining of hard brittle material, such as silicone, semiconductor and sapphire, and gradually took the place of traditional inner slicing machine. Multi-wire saw is also introduced to the machining process of rare earth permanent magnet by Chinese manufacturers, and achieved good results.

For rapidly and efficiently machining rare earth magnets, U-Polemag has made a huge investment in new plant for multi-wire saw equipments for allowing integration of a wire cutting process into a high volume production scale operation. Multi-wire saw depend mainly on reciprocating motion of thin steel wire, then enable grinding and cutting for material. Due to the environmental item, Silicon Carbide mortar has virtually been abandoned by users, and resin bonded diamond line has become mainstream.