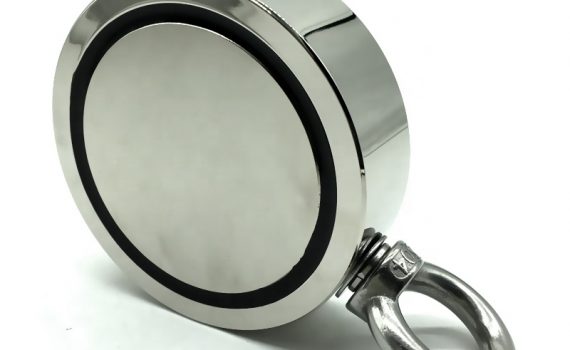 ●Magnetic recording media: VHS tapes contain a reel of magnetic tape. The information that makes up the video and sound is encoded on the magnetic coating on the tape. Common audio cassettes also rely on magnetic tape. Similarly, in computers, floppy disks and hard disks record data on a thin magnetic coating.
●Credit, debit, and automatic teller machine cards: All of these cards have a magnetic strip on one side. This strip encodes the information to contact an individual’s financial institution and connect with their account(s).
●Older types of televisions (non flat screen) and older large computer monitors: TV and computer screens containing a cathode ray tube employ an electromagnet to guide electrons to the screen.
●Speakers and microphones: Most speakers employ a permanent magnet and a current-carrying coil to convert electric energy (the signal) into mechanical energy (movement that creates the sound). The coil is wrapped around a bobbin attached to the speaker cone and carries the signal as changing current that interacts with the field of the permanent magnet. The voice coil feels a magnetic force and in response, moves the cone and pressurizes the neighboring air, thus generating sound. Dynamic microphones employ the same concept, but in reverse. A microphone has a diaphragm or membrane attached to a coil of wire. The coil rests inside a specially shaped magnet. When sound vibrates the membrane, the coil is vibrated as well. As the coil moves through the magnetic field, a voltage is induced across the coil. This voltage drives a current in the wire that is characteristic of the original sound.
●Electric guitars use magnetic pickups to transduce the vibration of guitar strings into electric current that can then be amplified. This is different from the principle behind the speaker and dynamic microphone because the vibrations are sensed directly by the magnet, and a diaphragm is not employed. The Hammond organ used a similar principle, with rotating tonewheels instead of strings.
●Electric motors and generators: Some electric motors rely upon a combination of an electromagnet and a permanent magnet, and, much like loudspeakers, they convert electric energy into mechanical energy. A generator is the reverse: it converts mechanical energy into electric energy by moving a conductor through a magnetic field.
●Medicine: Hospitals use magnetic resonance imaging to spot problems in a patient’s organs without invasive surgery.
●Chemistry: Chemists use nuclear magnetic resonance to characterize synthesized compounds.
Chucks are used in the metalworking field to hold objects. Magnets are also used in other types of fastening devices, such as the magnetic base, the magnetic clamp and the refrigerator magnet.
●Compasses: A compass (or mariner’s compass) is a magnetized pointer free to align itself with a magnetic field, most commonly Earth’s magnetic field.
●Art: Vinyl magnet sheets may be attached to paintings, photographs, and other ornamental articles, allowing them to be attached to refrigerators and other metal surfaces. Objects and paint can be applied directly to the magnet surface to create collage pieces of art. Magnetic art is portable, inexpensive and easy to create. Vinyl magnetic art is not for the refrigerator anymore. Colorful metal magnetic boards, strips, doors, microwave ovens, dishwashers, cars, metal I beams, and any metal surface can be receptive of magnetic vinyl art. Being a relatively new media for art, the creative uses for this material is just beginning.

●Science projects: Many topic questions are based on magnets, including the repulsion of current-carrying wires, the effect of temperature, and motors involving magnets.

●Magnets have many uses in toys. M-tic uses magnetic rods connected to metal spheres for construction. Note the geodesic tetrahedron
Toys: Given their ability to counteract the force of gravity at close range, magnets are often employed in children’s toys, such as the Magnet Space Wheel and Levitron, to amusing effect.
●Refrigerator magnets are used to adorn kitchens, as a souvenir, or simply to hold a note or photo to the refrigerator door.
●Magnets can be used to make jewelry. Necklaces and bracelets can have a magnetic clasp, or may be constructed entirely from a linked series of magnets and ferrous beads.
●Magnets can pick up magnetic items (iron nails, staples, tacks, paper clips) that are either too small, too hard to reach, or too thin for fingers to hold. Some screwdrivers are magnetized for this purpose.
●Magnets can be used in scrap and salvage operations to separate magnetic metals (iron, cobalt, and nickel) from non-magnetic metals (aluminum, non-ferrous alloys, etc.). The same idea can be used in the so-called “magnet test”, in which an auto body is inspected with a magnet to detect areas repaired using fiberglass or plastic putty.
●Magnets are found in process industries, food manufacturing especially, in order to remove metal foreign bodies from materials entering the process (raw materials) or to detect a possible contamination at the end of the process and prior to packaging. They constitute an important layer of protection for the process equipment and for the final consumer.
●Magnetic levitation transport, or maglev, is a form of transportation that suspends, guides and propels vehicles (especially trains) through electromagnetic force. Eliminating rolling resistance increases efficiency. The maximum recorded speed of a maglev train is 581 kilometers per hour (361 mph).
●Magnets may be used to serve as a fail-safe device for some cable connections. For example, the power cords of some laptops are magnetic to prevent accidental damage to the port when tripped over. The MagSafe power connection to the Apple MacBook is one such example.